New Zealand farm businesses can significantly reduce silage spoilage and retain more nutrients in their forage thanks to improvements in silage preservation technologies. At a time when feed costs are rising, it is now more important than ever to reduce the impact of silage losses to retain valuable, locally grown feed.

What are silage losses?

Silage with greater losses can also have higher levels of protein degradation, lower metabolisable energy and be higher in mycotoxins which results in poorer animal health and performance. Therefore, it is important to minimise those losses from both a financial and animal performance perspective.

One of the latest advancements in silage technologies has been a significant improvement in the quality of plastics used to seal silage stacks. In the past, with polyethelyene plastic (for example, the traditional black/white covers), the only way to reduce oxygen transfer into the stack was to increase the weight or thickness of the plastic. This has meant tyre-to-tyre coverage is required to try to reduce spoilage. However, losses under this system still average 19.5% in the top cubic metre[1].

Compare this to next generation oxygen barrier film, SiloStop® Orange, where oxygen transmission rate is drastically reduced to the point that one 45μm layer of SiloStop® Orange is equivalent to almost 60 black and white covers based on the amount of oxygen it lets through[2]. The result is that silage losses in the top cubic metre are reduced by almost half, to just 11.4%. This technology comes from a combination of 7-layers of polyethelyene and ethylene vinyl alcohol which has been co-extruded with a resin. In other words, SiloStop® Orange is a significant advancement in plastic technology to result in one of the most powerful oxygen barriers seen to date.

In addition to the reduced silage losses during storage, there is also a significant decrease in the percentage of inedible silage and an increase in the aerobic stability of that silage (Table 2). This represents $7.20 worth of lost silage per m2 for grass silage or $15.30 for maize or whole crop cereal silage[3]. There is also a reduction in labour to remove inedible silage off the top and shoulders, as well as impacts on intake, palatability and NDF digestibility if this inedible silage contaminates the whole feed mix[4].

To find out more about SiloStop® oxygen barrier options to suit your stacks or bales, get in touch with your local Nutritech Area Manager.

Getting the right grass silage inoculant

As we head into grass silage season it is important to think about which silage inoculants are going to give you the best chance of minimising silage losses and improving silage quality.

Sil-All® 4×4+ has been New Zealand’s tried and trusted silage inoculant for ‘green crops’ that have difficult ensiling conditions. Low dry matter, high protein, and often high calcium content all make spring silages very difficult to ferment and are therefore at risk of significant spoilage. The slower the fall in pH, the greater the risk that these silages will have poor palatability and low nutrient value. In most cases, Sil-All® 4×4+ is your ‘go to’ option for ryegrass, clover and lucerne silages.

However, in certain situations (see bullet points below), rather than requiring all ‘front end fermenters’, some crops would benefit from a product that will increase their aerobic stability on opening.

Earlier this year Nutritech brought to market the MAGNIVA® Platinum inoculant, which is the first time in almost twenty years that a new strain of aerobic stability bacteria has been available to New Zealand contractors and farmers.

Aerobic stability technology is specifically designed to keep silage cool once opened. This is essential for most high-starch silages such as maize and wholecrop cereal silage, but in certain conditions aerobic stability may also be important for grass and legume forages.

Conditions that may cause grass and legume silages to heat or have poor aerobic stability include:

Trials conducted by Lallemand have shown promising results for MAGNIVA® Platinum on grass or legume silage that is prone to heating.

Forage containing rye grass (35%), white clover (15%) and cocksfoot (50%) measured 48% dry matter, 9% crude protein and 21% soluble sugars before ensiling. Based on these specifications it would be very prone to heating. As shown in Figure 1, after approximately 40 hours exposed to air, the untreated silage showed significant heating, whereas the silage treated with MAGNIVA® Platinum stayed cooler for longer. There is also less visual spoilage on the ryegrass silage treated with MAGNIVA® Platinum, even after six days exposed to air.

This means that MAGNIVA® Platinum can be of significant benefit for all crops that are at risk of heating. With both Sil-All®4×4+ and MAGNIVA® Platinum, Nutritech have a range of specialised silage inoculants to treat specific ensiling challenges. 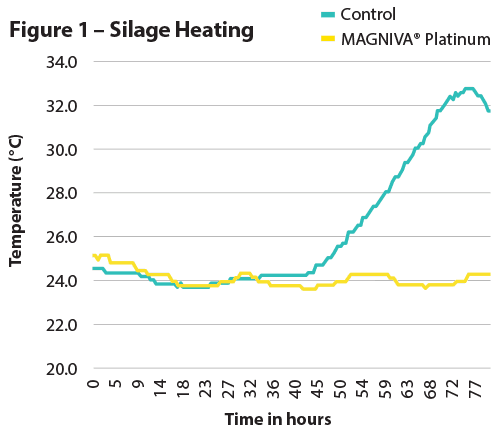